Now that we are on Christmas break, let’s take a moment to recap on the year that was 2017. It’s been an eventful year for S-Factor Academy, we started the year with warm weather training in Portugal, where we saw a handful of our athletes take to the tracks in the heat to undergo intensive training programmes, and in particular we saw a marked improvement in the performances of Coach Robert Mason’s long distance athletes Mohamed Elmi and Sam Long. Our Juniors also did a stellar job at the Minithons and QuadKids fixtures, our intermediate and senior athletes broke some long-held club records at our LICC fixtures, and we also did very well at the Kent Cross Country League where two of our athletes made the shortlist for county selection, with one going on to actually represent Kent County! 2017 has seen us deliver satellite sessions within Bonus Pastor Catholic College – one of our key mechanisms for attracting talent to the club.   Adam Thomas led a strong team to deliver this year’s disability summer training camp in conjunction with the Team Personal Best initiative! S-Factor’s disability team is now an England Athletics Ambassador Club for disability athletics as part of England Athletics’ Inspiration Club Project. Coach Adam also became our first Mental Health Ambassador, representing S-Factor Academy as part of the England Athletics Mental Health Ambassador Programme.

S-Factor held its very first club competition day at Ladywell Arena. Something we intend to continue on an annual basis. A great day all-round, with some great performances including a coach vs athlete relay to finish!

This year has also seen the addition of some new volunteers; Calister Rhoomes, Clyde Berry, Noeilla Muse and Nia Saraiah in the Junior Team, Ines Henriques joined our Disability Team along with a host of young volunteers, and Tariro Madzima who joined the club’s Management Committee as Vice Chair. We rounded off the year with a spectacular awards evening recognising the talents of our athletes and hard work, dedication and commitment of our volunteers. The evening was an inspirational one with appearances from our Ambassadors – Olympians Christine Ohuruogu and Ade Adepitan as well as industry notables Chris Grant (Sported) and CK Flash (BMX).

Going into 2018, we will see two key volunteer role changes:

Calister Rhoomes takes over as Lead Junior Coach from Darren Brown who has been a pillar of the club and a friendly and familiar face to our youngest athletes for many years. Cal, the father of one of our very own junior track stars Mason, has a military background and has plenty of experience with children having managed a group of Scouts. Darren will continue to actively support the Juniors on Saturdays.

We will also see Johnathan Regis take on the role of Lead Senior Coach and Head Coach, replacing Robert Mason who has held this role since 2014. Johnathan (who is the nephew of Olympian John Regis MBE, who holds the British 200m record to this day!) has been involved in athletics for over 20 years, beginning as an international sprint athlete himself and has now dedicated himself to coaching the next generation of athletes. We congratulate both Calister and Johnathan in their new roles as we head into 2018 and thank Robert and Darren whole-heartedly for their hard work and immeasurable commitment shown to date.

We have plenty to look forward to in 2018 including S-Factor’s participation in the Big Half, warm weather training in Spain, our AGM, plenty of fixtures, another S-Factor competition day, another awards evening, more outreach and satellite sessions, the re-launch of some of our dormant programmes as well as some other initiatives.

Well done to all our athletes and thank you to our volunteers, without you there is no S-Factor. Lisa Miller – your vision is well and truly alive!

Have a Merry Christmas everyone and a Happy New Year when it arrives! 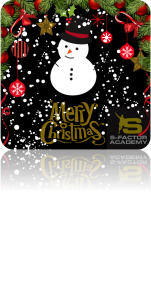 Support us by using EasyFundraising.com